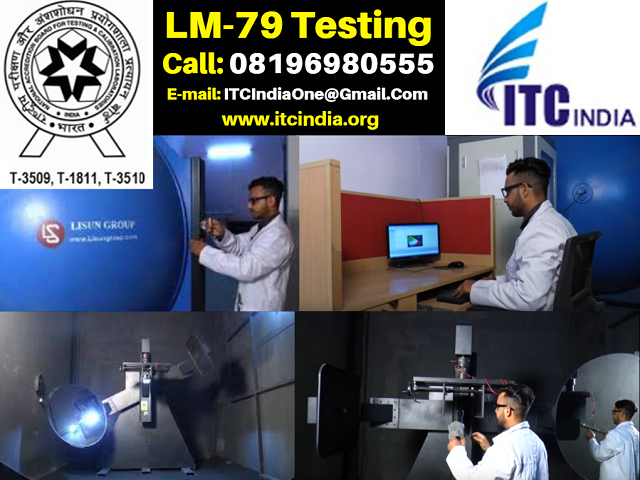 ITC India  NABL approved Testing Laboratory (with Certificate No. T 1811 attached herewith) with specialization to test against EN and IEC standards for electrical safety leading to CE/NIST/IEC certification. Our Lab is fully equipped with high accuracy measuring testing Instruments and trained personal to provide testing & certification services for different type of products according to IEC Standards. Some of which are IEC 60335–1, IEC 60601, IEC 61010, IEC 60204, IEC 60598, IEC 60950, IEC 61427, BS EN 50262, etc…..

ITCIndia laboratory features both a Type A and Type C Goniometer for testing a wide variety of luminaires.

What is LM-79 Luminaire Testing?

LM-79-08. It is the Illuminating Engineering Society of North America (IESNA) approved method for the Electrical and Photometric Measurements of Solid-State Lighting. It measures an LED luminaire or integral lamp as a whole system according to a standard process using specified equipment.

Applies to LED-based products incorporating control electronics and heat sinks, that is, those devices that require only AC mains power or a DC voltage power supply to operate.

Kindly send us the following Details, So that we can provide you quotation for the same:

Information about Federal and State LED Lighting Programs and Resources.

Call us at 8196980555 or email [email protected] for price information or an immediate quote today.

If you have any query regarding LM 79 Testing, Kindly send us your testing requirements with the product technical details to submit you our testing charges.

We are waiting for your earliest reply. You can call or write us for any clarification

One thought on “LM-79 Testing Service in India”